The rushing and crashing sounds of the waves on the beach and rocks and gull calls aren’t the only sounds you can hear from Shore Acres State Park, south of Charleston, Oregon. Even in the sheltered garden, when the wind is just right, you can hear barking sea lions.

Drive a mile south of Shore Acres for the answer. On the right side of the road, you’ll find a turnout with a view of the ocean. Look beyond the fenced viewpoint about one-half mile, and you’ll see Simpson Reef, a jagged row of rocks pointing northwestward. During low tide, you’ll see a marble-shaped beach in front of the highest rock on the reef.

Sea lions gather on this small beach. From the viewpoint, you can easily spot their wet, dark brown bodies on the beach. But on warm days, they blend almost perfectly with the sand, because their coats dry and lighten from soaking in the sun’s rays. Yet even when the weather’s nice, a few swimmers reveal their salt-washed bodies as they climb onto the shore and waddle around the sunbathers.

Occasionally, a youngster takes too much time to switch from sea to land. As it starts to climb onto the beach, a wave grabs it and pulls it back into the ocean. A few seconds later, the somewhat surprised youngster emerges several yards from shore but tries again. It finally succeeds.

Although the ocean covers the beach at high tide, you can still see and hear the sea lions from the reef and spot them on the rocks through your binoculars. 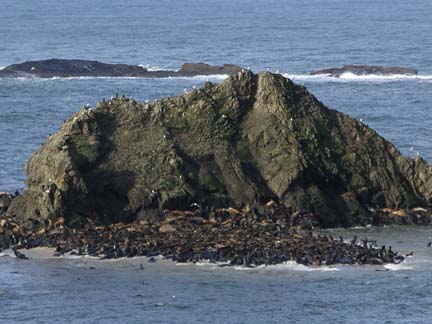 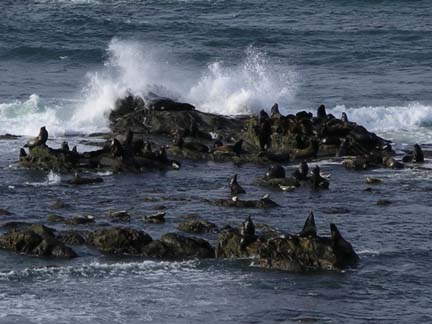 Simpson Reef is named after North Bend timber baron Louis J. Simpson. Shortly after the turn of the twentieth century, Simpson bought more than 750 acres from Sunset Bay to Cape Arago to build a summer home for his wife, Cassie. They named the summer home Shore Acres.

In 1932, he donated 134 acres south of present-day Shore Acres State Park to the State of Oregon to be used as a park. This property was developed into the Simpson Reef Viewpoint and Cape Arago State Park. Ten years later, he sold 637 additional acres to the state, which included the Shore Acres estate.

You can see more sea lions from another viewpoint at Cape Arago State Park, one-half mile south of Simpson Reef. A quarter-mile trail through a forest leads to a fenced viewpoint, where you can watch them on the rocks below. Depending on the weather and ocean conditions, you might see more sea lions at Cape Arago than at the reef. It’s best to check both locations just in case.

The state charges an entry fee to Shore Acres State Park, but admission to Simpson Reef and Cape Arago State Park is free.