Featured image: Playing with light at the Camera Obscura exhibit at the Children’s Museum & Theatre of Maine in Portland (photo by Cheryl Landes)

On the last Sunday in April, learn how to make images with a small beam of light at a workshop near you during Worldwide Pinhole Photography Day. Or experiment on your own.

So, what exactly is a pinhole camera? It’s a camera without a lens. Instead, it has a pinhole that acts like a tiny aperture—essentially a light-proof box with a small hole in one side. When you point the camera at an object, light from the object passes through the pinhole and projects an inverted image on the opposite side of the box. This effect is known as camera obscura.

Here are some examples of the camera obscura effect at a permanent exhibit I visited at the Children’s Museum & Theatre of Maine, 142 Free Street in downtown Portland. At this exhibit, three pinhole cameras are set up in a dark room. The light from each camera projects on a large screen. 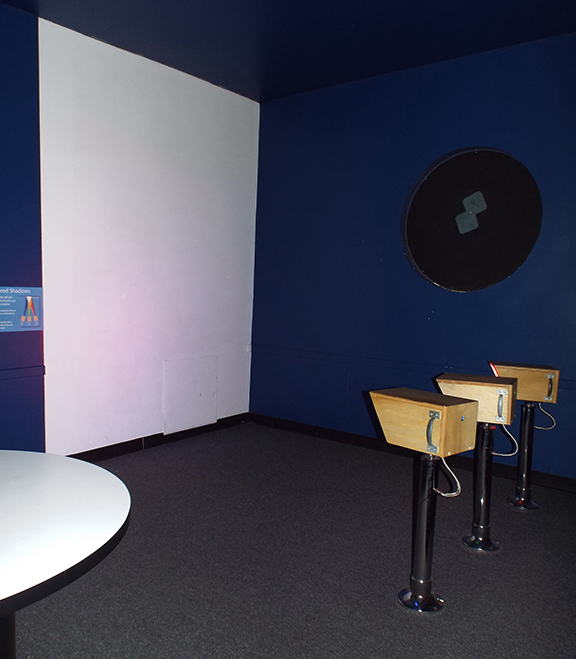 To create an image, I walked in front of the cameras and moved to change the colors and effects on the screen. The examples below and the featured image for this post are photos I took with my digital camera while moving around in the light. 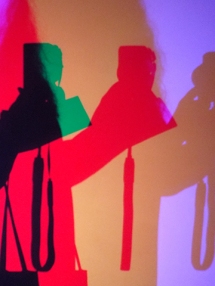 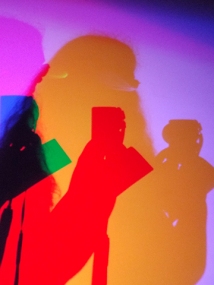 Build your own pinhole camera from a shoebox with a lid by following these instructions from National Geographic’s website.

And, when you achieve results you’d love to share with the world, scan your images and post them to the Worldwide Pinhole Photography’s gallery.

The permanent Camera Obscura exhibit at the Children’s Museum & Theatre of Maine is open during the museum’s regular hours: 10 a.m.-5 p.m. Tuesday-Thursday and Sunday, and 10 a.m.-8 p.m. Saturday. The museum is also open 9-11 a.m. Monday for members only. Discounted parking is available in several lots nearby; see the museum’s home page for details.