Featured image: The curtain waiting to rise for The Nutcracker at the Hult Center for the Performing Arts in Eugene, Oregon

Photos by Cheryl Landes, except where noted

The Nutcracker is one of my treasured holiday traditions. For years, wherever I travel, I attend performances by different ballet companies. Sometimes I even plan a trip around a production I haven’t seen. And although I’ve enjoyed them all, one of my favorites is in the Pacific Northwest.

The Eugene Ballet’s version of The Nutcracker is simply fun for youngsters and kids at heart like me.

Unlike many interpretations of The Nutcracker, The Eugene Ballet tells the story from beginning to end. It starts by introducing us to Herr Drosselmeyer at his toy shop, where he and his assistant are busy placing finishing touches on presents for the Stahlbaum family’s annual Christmas party tonight. Drosselmeyer picks up the final gift, a nutcracker he made for his goddaughter, Clara Stahlbaum, and double-checks it one more time before packing the toys to deliver to the party.

Meanwhile, Clara is getting ready for the party in her bedroom. Her mother enters to check on her and gives Clara a fan. Clara has trouble opening it, but with her mother’s help, finally learns how to use it.

Drosselmeyer distributes his gifts, saving Clara’s nutcracker for last. She falls in love with it and hugs it tightly. Her brother tries to take the nutcracker, a tug-of-war starts, and he breaks the nutcracker’s arm. Drosselmeyer repairs it,  and Clara carefully places the nutcracker in a safe place under the tree while her parents scold her brother.

After the party, when everyone goes to bed, Clara returns to the living room to check on her nutcracker. She takes it to bed and falls asleep.

Then, chaos begins. Small mice run around Clara’s bed. Bigger mice arrive and wake up Clara. The tree turns into a scary creature with a nutcracker face, along with other objects on the stage. And the sofa catches on fire.

Soldiers enter on horses, led by the Nutcracker, and fight the mice. Then the Mouse King arrives in a ship, where Clara hides and tries to distract him. Eventually the Mouse King is injured in the battle. Before he dies, he dances and encourages the audience to clap for him until he collapses.

The Nutcracker Prince is also injured, but recovers and turns into a prince. He helps Clara onto a horse, and he leads the horse to a hot air balloon that they board to fly to the Snow Kingdom and the Land of the Sweets.

Clara and the Nutcracker Prince start the flight to the Land of the Sweets (photo credit: Eugene Ballet Company)

After the last dance, Clara and the prince say good-by to the Sugar Plum Fairy, and Clara awakes in her bed with the nutcracker at her side. She smiles and hugs her nutcracker, fondly remembering her dream.

Overall, the Eugene Ballet’s version of The Nutcracker is a beautifully choreographed, executed production, with excellent storytelling that drew me in and made me feel that I experienced everything alongside Clara. The live choir music near the end of Act I, when Clara and the Prince began their flight to the Snow Kingdom and the Land of the Sweets, was beautiful and added a special touch to this scene. Next Orchestra’s performance of Pyotr Ilyich Tchaikovsky’s score was equally superb.

At the performances I’ve attended, the ballet, orchestra, and choir receive standing ovations at the end.

The Eugene Ballet was founded in 1978 and is the largest touring ballet company in the nation. During the holidays, they bring The Nutcracker to communities throughout the western US. And every year, generous sponsorships allow the ballet to provide hundreds of free tickets for low-income families to attend Nutcracker performances in Eugene.

The Eugene Ballet ends its Nutcracker tour every year with performances in Eugene for three days in mid- to late December (view details).

For more information about the Eugene Ballet and its performance schedule, visit its website or call the box office at (541) 485-3992. Buy tickets online or by phone.

Sometimes the Eugene Ballet hosts a special noontime Nutcracker Tea before its Sunday performance in Eugene.

I went to the 2016 Nutcracker Tea. It started with treats–a grand spread of finger sandwiches, vegetable trays, cheese and crackers, pastries, coffee, hot chocolate, and hot tea (of course!). After everyone settled, the host told the story of the Nutcracker while members of the Eugene Ballet Academy danced each scene. At the end of the story, the cast greeted the audience and posed for pictures.

For children, the Nutcracker Tea is a nice way to give them an introduction to the story before they see the full-length production. It’s even a good primer or refresher for adults, those big kids at heart.

Here are some pictures from the 2016 Nutcracker Tea. 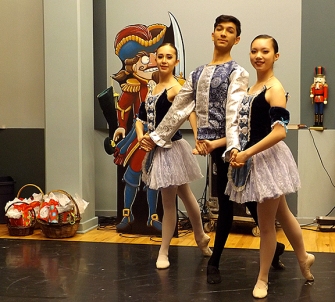 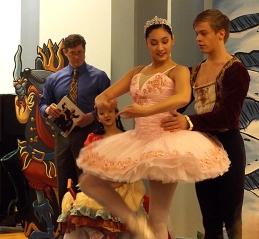