Looking for fun activities for the entire family on New Year’s Eve? Or you and your friends? Or maybe you and that special someone? These four First Night celebrations in Washington State and Montana have something for everyone.

Now in its 25th year, First Night Tacoma kicks off at 6 p.m. New Year’s Eve with the World’s Shortest Parade outside Tully’s Coffee on St. Helens and SW 9th Street (view the festival map). From there, it’s an evening of music, dance, circus acrobatics, puppets, and theater performances. Music includes Brazilian, folk, jazz, rock, and much more. There’s even an Open Mic Night.

At 9 p.m., the Iditarace starts outside Tully’s Coffee. Human-powered “dogsled” teams will compete on a 400-yard course. Learn more about the Iditarace.

Kids have a lot to do, too, with an Ice Walk, putt-putt golf, a scavenger hunt, jump rope, yoga, and celebrating The Year of the Dog with special activities from the Tacoma Nature Center. At the Children’s Museum of Tacoma, they can make a music shaker.

The Tacoma Art Museum, Children’s Museum of Tacoma, and Museum of Glass offer free admission to children when their parents or guardians accompany them with a First Night Tacoma button (details here).

Also see projected slides of Victorian-era entertainment by The Magic Lantern Society of the US and Canada, and make your own colored slide for projection. Magic lanterns and slides will be on display. 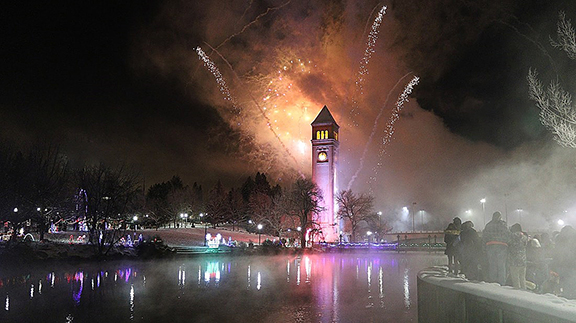 Live music, dancing, ice skating, craft making, face painting, a film festival, and fireworks are among the activities scheduled for First Night Spokane. These activities will be held at the convention center, hotels, bookstores, and outdoor venues throughout the city. Park for free at the Washington State University Riverfront Campus, in the South Campus Green Lot at 412 East Spokane Falls Boulevard. Free shuttles run from the Green Lot to the First Night sites every 10 minutes starting at 1:45 p.m. New Year’s Eve. The last shuttle is at 12:30 a.m. New Year’s Day.

View a map and schedule of First Night Spokane’s activities.

A button admits you to all activities, and costs $15 per person in advance or $18 at the door. You’ll also need the button to ride the free shuttle. Buy buttons at these locations; no online sales are available.

The Arts Committee of the Spokane Chamber of Commerce launched First Night Spokane in 2001.

Check out the featured performers at First Night Tri-Cities.

Kids’ activities include balloon animals, face painting, henna tattoos, and airbrush art. And there are visits from special guests like Queen Elsa and Cinderella.

The ball drop and fireworks start at 9 p.m.

All First Night Tri-Cities activities are held at the Gesa Carousel of Dreams at 2901 Southridge Boulevard in Kennewick, starting at 3 p.m. New Year’s Eve. Admission is $7 ages 5 and older and free ages 4 and younger. Save $1 off admission by using your Gesa Credit Union Visa card for payment at the door. One token, good for one carousel ride, is included in admission. Buy additional tokens at the carousel.

Admission to First Night Missoula’s activities is $15 in advance for ages 11 and older and $18 on December 31. Ages 10 and younger are free. Buy tickets online or at one of these merchants.

At 8:30 p.m. at the University of Montana’s Dennison Theatre, watch the talent competition at First Night Spotlight. Admission is $2 per person in advance and $3 on December 31. Buy tickets here.

How the First Night movement began

In 1976, a group of artists in Boston started First Night as an alternative to the traditional New Year’s celebrations. They wanted an event that catered to the entire family and spread awareness about the arts. They launched First Night Boston as a finale to the US Bicentennial celebration.

Today, First Night is celebrated in more than 100 North American cities, as well as Australia, New Zealand, and the United Kingdom. Here’s a list of all US cities that host First Night events.

One thought on “Four First Night celebrations in the Northwest”