If you’re in Orlando, Florida, and need to get your Voodoo Doughnut fix, you can starting this spring. That’s when a new store opens at the Universal Orlando Resort, next door to the NBC Sports Grill & Brew near the Universal Global and Universal Studios Florida entrance.

The new store carries on the tradition of the original Portland, Oregon, store, with the funky pink décor and 50 varieties of doughnuts, some with irreverent names. 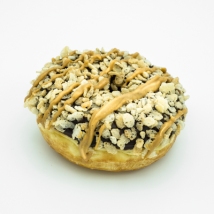 Kenneth “Cat Daddy” Pogson and Tres Shannon opened Voodoo Doughnut in 2003 at 22 SW 3rd Avenue in Portland, Oregon. Voodoo Doughnut became famous for its signature voodoo doll doughnut with a stake in its chest and many unusual flavor combinations. Since then, Voodoo Doughnut has expanded to two Portland locations and a food cart; Eugene, Oregon; Denver, Colorado; Austin, Texas; and the Universal City Walk in Hollywood, California.

The Universal Orlando Resort shop is the first east of the Mississippi River.

Thousands of tourists stop at the original store every year out of curiosity and to stock up. When I fly from the Portland International Airport, usually I see at least one person boarding the same flight, carrying the signature pink Voodoo Doughnut box full of treats to take home.

All Voodoo Doughnut shops accept cash only but have ATM machines.