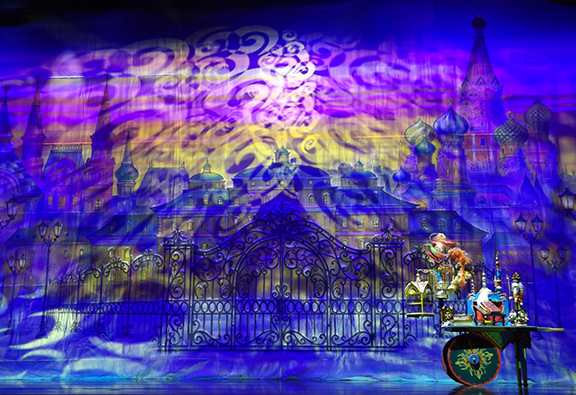 Featured image: The stage for the Moscow Ballet’s performance of the Great Russian Nutcracker at the Jack Singer Concert Hall in Calgary (photo by Cheryl Landes)

The Moscow Ballet probably has the most aggressive schedule of any touring ballet company. In two months in 2017, it performed the Great Russian Nutcracker 130 times in cities throughout the U.S. and Canada.

I bought a ticket for the Moscow Ballet’s appearance in mid-November at the Jack Singer Concert Hall in Calgary’s Arts Commons, and what a performance it was.

The Nutcracker story is told in “historic Russian theatrical traditions,” according to the Moscow Ballet’s website. It begins with Uncle Drosselmeyer finishing his toys for the Christmas Eve party at Mayor Stahlbaum’s house. Masha Stahlbaum, her brother Fritz, and their friends love the magical life-sized dolls, huge nesting dolls, and puppet show. When Drosselmeyer passes out gifts to all of the children, he gives Masha a nutcracker. Fritz breaks it, but Drosselmeyer repairs it.

After the party, Masha falls asleep and dreams about a fight between her nutcracker and the Rat King. The nutcracker wins and turns into a prince. He takes Masha on a journey through the Snow Forest, where they meet Father Christmas and the Snow Maiden, who escort them to the Land of Peace and Harmony.

When they arrive in the Land of Peace and Harmony, the Dove of Peace greets Masha and the prince. Ten-foot tall puppets of bulls, elephants, dragons, bears, unicorns, and lions join emissaries in dances from around the world in honor of Masha and the prince. Then flowers perform a waltz, and Masha and her prince dance a grand pas de deux as a gift to their friends. The celebration ends and Masha awakens, wondering whether her dream was real.

The dancers perform with a recorded Tchaikovsky score in front of nine different hand-painted scenes with three-dimensional effects. Their skills were magnificient, breaking the boundaries of ballet. The most outstanding dance was by the Arabian couple, where the male balanced the female with one outstretched arm. It’s the first time I’ve seen this in ballet, and it was executed flawlessly. All of the dancing was flawless.

My only criticism is that it was hard to follow the story at times, especially in the second act. After distributing the toys to the children, Drosselmeyer made brief appearances throughout both acts. Maybe he was directing Masha’s dream with his magical powers, and his appearances were reminders for the audience.

I decided to forget about the story and enjoy the dancing instead.

Overall, I’m glad I came. It was worth the trip.

Visit the Moscow Ballet’s website for more information about the company, its tour schedule, and to buy tickets.

The Moscow Ballet’s performances include an average of 100 local children from each city on the tour schedule, with dance roles created exclusively for each child’s skill level. Every fall before the tour starts, Moscow Ballet’s audition directors travel the U.S. and Canada for auditions and rehearsals with local ballet companies and to prepare the students for the programs.