It’s waterfowl migration season in North America. Thousands of snow geese have arrived in the Plains and Midwest, and the sandhill cranes aren’t far behind.

KETV in Omaha posted this video with incredible scenes of the snow geese at the DeSoto National Wildlife Refuge. The station reports that refuge officials “haven’t seen this many migrating snow geese in the area for at least 15 years.”

Wildlife experts say that the snow geese are lingering because of lakes still frozen and snow-covered fields at their destination. The snow geese seek open water for roosting and open fields where they can find food.

But if you want to see them, don’t delay. They’ll probably resume their trip north in a few days.

In the meantime, the sandhill cranes are arriving in central Nebraska. As of Monday, February 26, the Crane Trust Nature & Visitor Center near Wood River reported more than 25,000 cranes along the Platte River. By the last two weeks of March, the numbers will increase to around 500,000. It’s the largest gathering of sandhill cranes in the world. 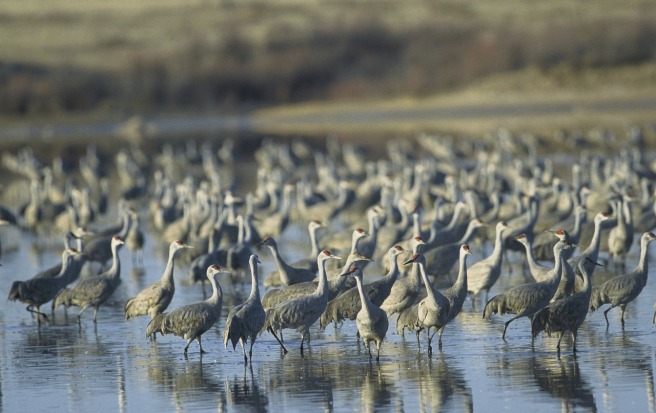