African Americans were soldiers in U.S. regiments as early as the Civil War (April 12, 1861–April 9, 1865), when they fought for the Union Army. In 1866, six all-black cavalries formed when Congress passed the Army Organization Act.

These Buffalo Soldiers, as they became known, had roles similar to policemen in the American West. They captured thieves and cattle rustlers. They protected stagecoaches, wagon trains, railroad crews, and settlers. And when conflicts brewed between the Native Americans of the Plains and the whites, they were there to keep the peace.

It isn’t known how these calvaries received the Buffalo Soldiers name, but they adopted it with pride. One story claims that the Native Americans came up with the name, because the soldiers’ curly hair reminded them of the buffalo.

The Buffalo Soldiers had a strong presence in the Pacific Northwest. “In July 1904 the Buffalo Soldiers 9th Cavalry from Fort Walla Walla participated in maneuvers with the National Guards of Washington, Idaho, and Oregon at Camp Murray near American Lake,” the DuPont Historical Society and Museum stated in an article published in The Suburban Times on January 30. “An encampment of about 2000 men, including the 9th Buffalo Soldiers, was set up on the banks of Sequalitchew Creek near the old Hudson’s Bay 1843 Fort Nisqually site in current day DuPont with approximately another 2000 soldiers encamped at Steilacoom Lake.”

An exhibit at the DuPont Historical Society and Museum through March 31 relives the story of the DuPont Buffalo Soldiers’ encampment and maneuvers. On Sunday, February 10, from 2 to 4 p.m., the museum also hosts an open house with a special program honoring Frank Powell, a local 92-year-old World War II veteran and Buffalo Soldier.

The exhibit and open house are supported by the Buffalo Soldiers Museum in Tacoma and the Lewis Army Museum at Fort Lewis. Admission to the DuPont Historical Society and Museum and the open house is free. Donations are appreciated. 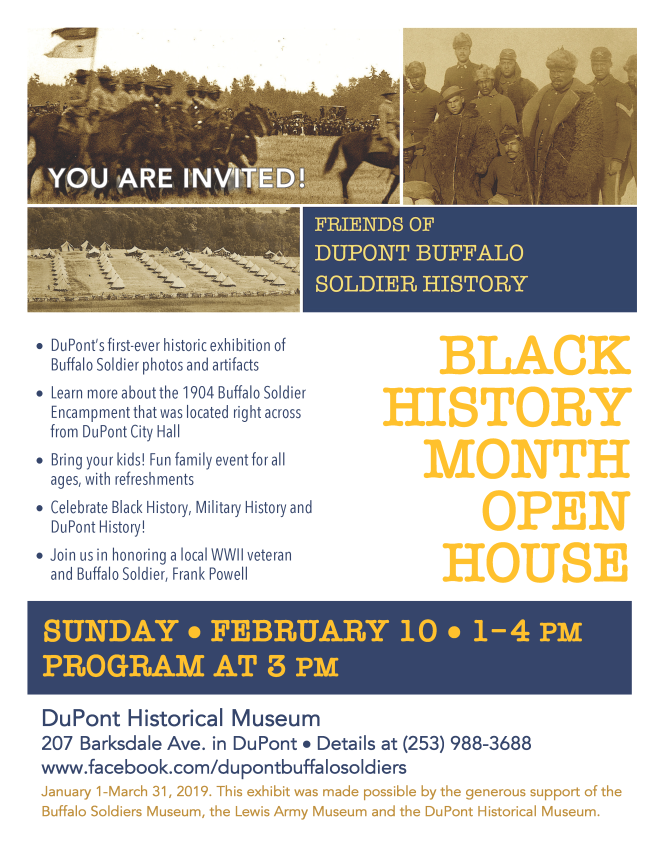