Are you seeing more teddy bears in windows in your neighborhood? If you’re noticing them, are you actively looking for them when you go on walks and drives?

Maybe some of your bears are hanging out in a windowsill right now.

It’s part of a worldwide teddy bear scavenger hunt coming to neighborhoods one at a time. Michael Rosen’s classic children’s book, We’re Going on a Bear Hunt, inspired this trend. The goal is to bring joy to small and big kids alike when they’re on a walk or drive in their neighborhoods.

The hunt has become so popular that there are hash tags for sightings on social media. I went there tonight to look, and every second, someone posts a new picture of a bear spotted or their bears waiting to be seen:

Sometimes other furry friends at home like to get involved, like this cat in Marisa Donelan’s home. 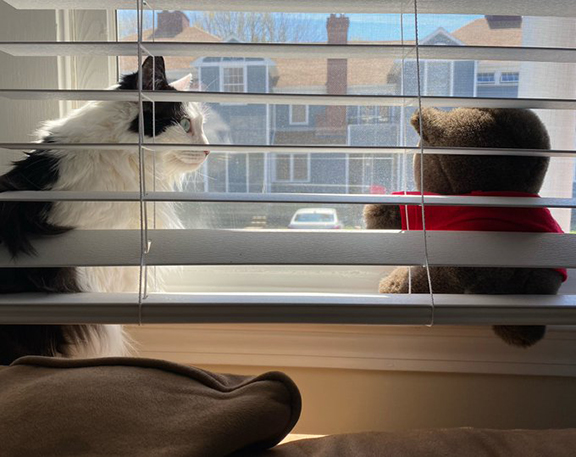 If you venture out to look for bears, remember:

Read more about the bear hunts at:

George the Teddy watching for his admirer in Malvern, Worcestershire (photo by rosegardentea on Instagram)