In addition to factory tours, two more of my must-see attractions during any trip are historical markers and covered bridges. Historical markers can pop up anywhere, and their brief descriptions can teach any interested reader a lot about the local area and culture. Covered bridges also provide insights into the history and culture of a place. The different styles of architecture and quality of work fascinate me. Many of these bridges are still standing after well over a century.

Parke County, Indiana, is a paradise for covered bridge fans. Thirty-one bridges dating from the mid-1800s through the late 1910s span creeks and rivers throughout the county near the Illinois border.  Because of the large number of bridges still standing, Parke County is known as The Covered Bridge Capital of the World.

During one of my cross-country drives, I visited five of the bridges. Strong periods of rain and thunderstorms prevented me from visiting more, so I plan to explore the rest during a future trip to Indiana. The pictures in today’s armchair photo tour include the five bridges I saw during my last trip.

My first stop before searching for bridges was the 10 O’Clock Line historical marker near the Harmony Church of Christ in Rockville. The marker reads, “The famous Indian Reserve Line of 1809 which began at the mouth of Big Raccoon Creek and ended on the Ohio boundary crossed this point.”

In 1809, a consortium of native peoples sold a large portion of their land to the federal government. According to legend, Miami Chief Little Turtle, who negotiated the treaty for the native consortium, didn’t believe the whites’ surveying equipment would draw an accurate boundary.  The only boundary he would accept was a line created by the shadow of a spear that was thrown into the ground at ten o’clock in the morning.

Read the story about the Ten O’Clock Treaty from Indiana Public Media.

When I returned to my car parked at the Harmony Church of Christ, I became fascinated by the church’s architectural design and took a few minutes to snap a few pictures. The sun came out long enough to provide good background lighting.

As I continued the drive, I spotted Gobbler’s Knob Country Store in Bloomingdale and stopped for refreshments. The store is a combination sweet shop and gift shop. Treats for sale include ice cream, homemade candy, and old-fashioned candies. I bought some homemade fudge and a cold bottle of root beer. Both were delicious. 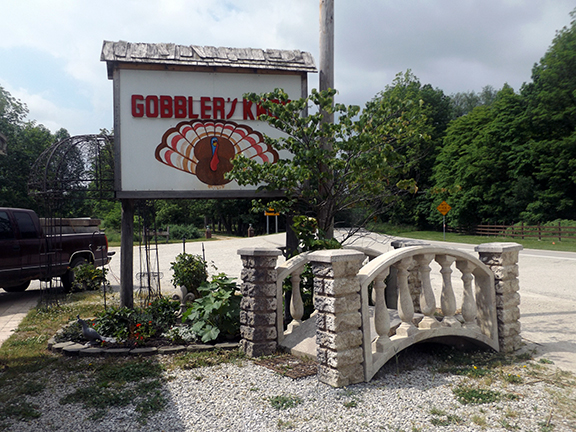 The entrance to Gobbler’s Knob Country Store in Bloomingdale, Indiana (left); sassafras tea for sale at the store (middle), and a “happy campers welcome” sign at the entrance to the store (right) 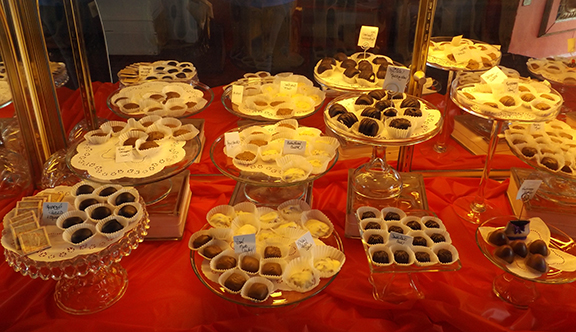 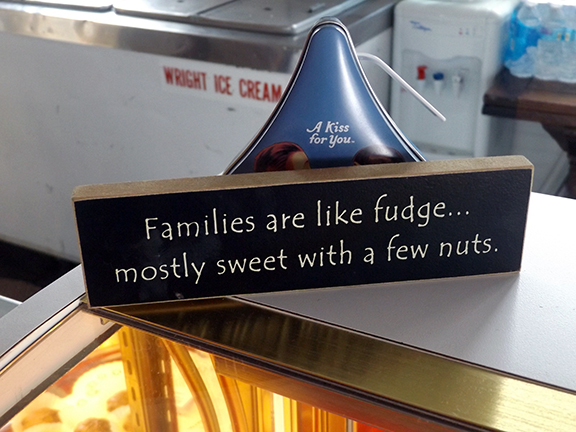 From there, I went bridge hunting.

The Cox Ford Bridge was built in 1913 by Joseph A. Britton. It crosses Sugar Creek west of Turkey Run State Park. It has a burr arch truss and a concrete foundation on top of stone blocks. 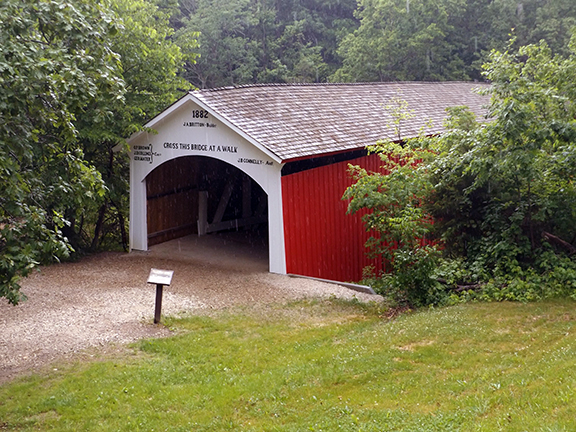 The Narrows Bridge was built in 1882 by Joseph A. Britton. It crosses Sugar Creek next to the Lusk Mill site on the east side of Turkey Run State Park. It has a burr arch truss and a stone foundation. 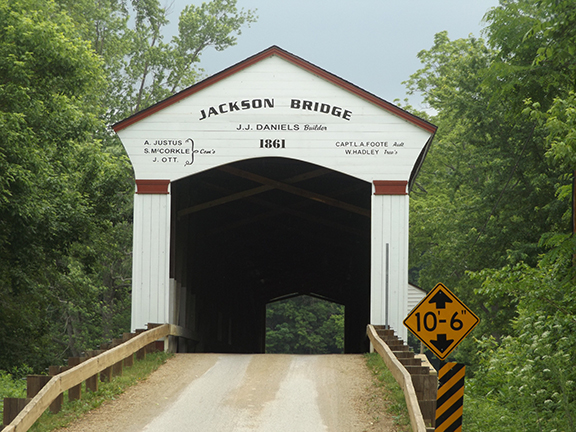 The Jackson Bridge was built in 1861 by Joseph J. Daniels. It crosses Sugar Creek 2.5 miles northwest of Annapolis, near Bridge. It has a double burr arch and double king post truss and a hewn stone foundation.

The Billie Creek Bridge was built in 1895 by Joseph J. Daniels. It replaced a bridge built at the same location by Joseph A. Britton in 1880. The bridge crosses Williams Creek in Billie Creek Village east of Rockville. It has a burr arch truss and a cut sandstone foundation. 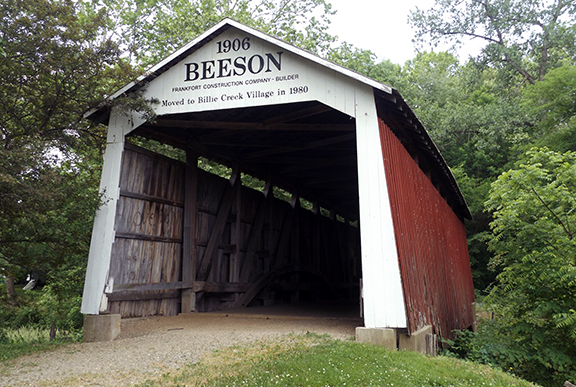 The Beeson Bridge was built by the Frankfort Construction Company in 1906 across Big Raccoon Creek, one mile northwest of Marshall on County Road 216. In 1980, Buchta Trucking moved the bridge to its current location at Billie Creek Village on U.S. Highway 36, where it crosses Williams Creek. The bridge has a burr arch truss, and its original foundation was concrete. When the bridge was moved to Billie Creek Village, it was placed on another concrete foundation reset on creosoted wood. 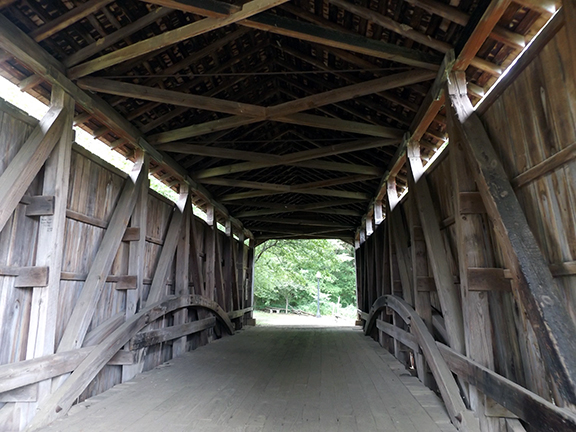 A reproduction of a medicine show wagon in Billie Creek Village

Parke County hosts a covered bridge festival every year from early to mid-October. Get more details about the festival on the Parke County Covered Bridges website. I haven’t attended the festival yet; it’s on my travel bucket list.