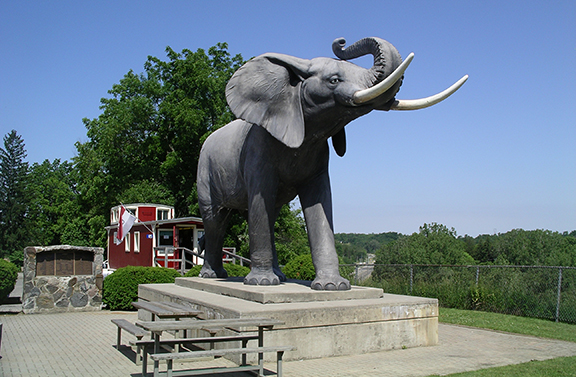 Jumbo, a 12-foot-tall African elephant weighing seven tons, was captured in Africa and brought to the London Zoological Gardens. In 1882, P.T. Barnum bought Jumbo from the zoo, and he became the biggest star of the Barnum & Bailey Circus.

At 9:30 p.m. on September 15, 1885, Jumbo’s trainer, Matthew Scott, was escorting Jumbo and a smaller elephant named Tom Thumb to their cages at the railroad tracks in St. Thomas, Ontario. Suddenly a special freight train appeared from the east. Scott tried to move the elephants out of the path of the train, but before he succeeded, Tom Thumb was struck from behind and thrown into a ditch. Tom Thumb’s leg was broken.

Within seconds, the freight train also struck Jumbo’s back legs and he was hurled to the back of the circus train. As he lay on the track, he stretched out his trunk and rested it in Scott’s hand. Scott tried to comfort Jumbo as much as possible during the last 15 minutes of his life.

One hundred years later, the citizens of St. Thomas and Elgin County commissioned a monument to remember Jumbo. The monument was designed and built by Winston Bronnum in Sussex, New Brunswick, and the City of St. Thomas provided the site for the memorial.

The memorial is located at 76 Talbot Street in St. Thomas, 128 miles (206 kilometers) southwest of Toronto.

Read the full story about Jumbo on the Railway City St. Thomas blog.