Featured image: The library, decorated in the “Antique Playing Cards” theme by Sally Woolley, at the Pittock Mansion in Portland. (photo by Cheryl Landes)

In the west hills of Portland, a grand century-old French Renaissance chateau stands in memory of a family who helped transform Portland from a small, isolated lumber town to a bustling, modern city. In 1914, Henry and Georgiana Pittock built the mansion on 46 acres with a sweeping view of Portland. On a clear day, they could also see Mount Hood rising behind the Portland skyline, Mount Hood and Adams to the northeast, and Mount Jefferson to the southeast. 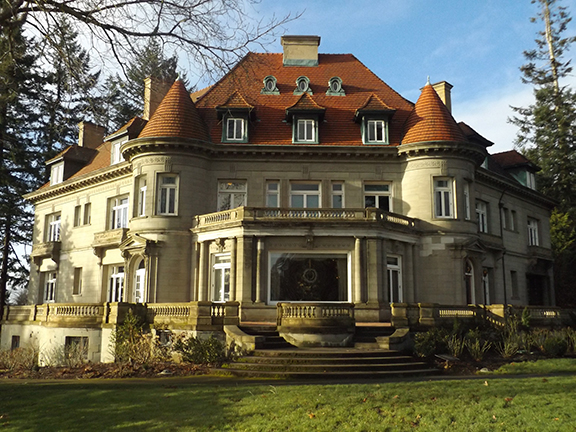 From Thanksgiving week until New Year’s Eve, volunteers decorate the mansion for Symbols of the Season. Every room has a different theme, ranging from rustic to playful. Designs are inspired by traditional symbols of the holidays, such as evergreen trees, poinsettias, snowflakes, sleds, Nativity scenes, and nutcrackers.

Local musicians perform in the music room, and Santa Claus wanders throughout the mansion to greet his fans. 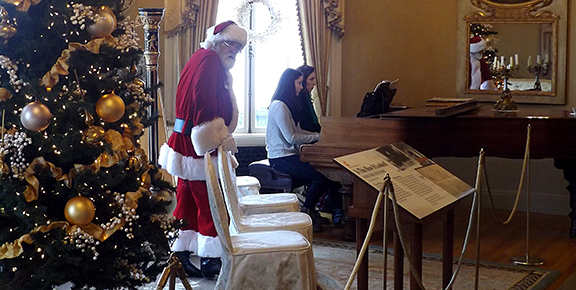 In the kitchen, you can browse through traditional holidays recipes. 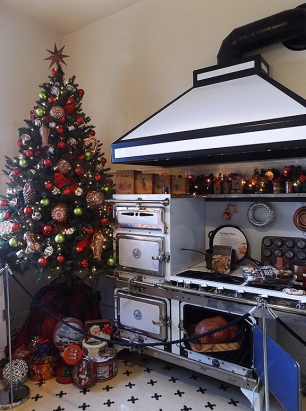 Holiday decorations in the kitchen and tradesmen’s staircase. The kitchen theme is “Family Recipes,” by Alison Chapman and Nancy Kurkinen. (photos by Cheryl Landes)

Henry Pittock and Georgiana Burton arrived in Portland in the 1850s, after crossing the Oregon Trail in separate wagon trains and were married shortly thereafter. Henry took a job as a typesetter at The Weekly Oregonian newspaper and became the owner and publisher. He expanded his business ventures into banking, paper and pulp, railroads, real estate, sheep ranching, silver mining, and steamboats. Georgiana raised the children and kept active in many local charities.

The Pittocks loved the outdoors. Henry climbed Mount Hood four times, hiked with the Mazamas—which is still active today—and rode with the Oregon Bicycling Club. Georgiana tended a terraced garden at the mansion with as many varieties of flowers as she could find. She’s credited for starting Portland’s annual Rose Festival. 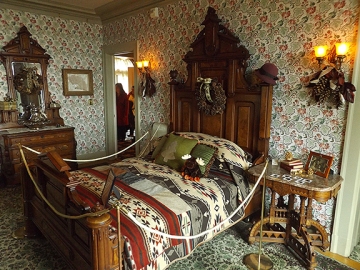 “Fresh Air and Pinecones” theme, by Katie Walker, in the south bedroom on the second floor (photos by Cheryl Landes)

The couple lived in the mansion until their deaths: Georgiana in 1918 and Henry in 1919. The family continued living there until 1958, when the surviving members moved out and tried to sell the property. 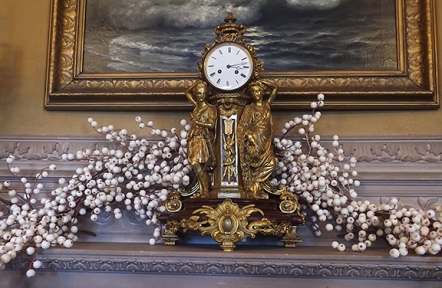 Four years later, hurricane-force winds from the Columbus Day Storm caused extensive damage to the mansion. Broken roof tiles and windows exposed the interior to the elements for 18 months, resulting in more damage.

Developers wanted to buy the estate and replace it with a subdivision, but Portlanders intervened by starting a grassroots fundraising campaign. In 1964, the City of Portland bought the property for $225,000, which included $67,500 the citizens raised. The city opened the mansion to the public after 15 months of repairs.

For more information about Symbols of the Season, visit the exhibit page on Pittock Mansion’s website or call (503) 823-3623. 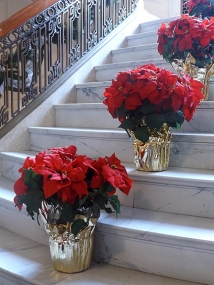 Poinsettias on the grand staircase (left), and snowpeople waiting for treats in the social room (right) (photo by Cheryl Landes)