During a recent late afternoon trip to downtown Seattle, I grabbed a latte at a coffee shop and watched passersby along Sixth Avenue near Dimitriou’s Jazz Alley. This neighborhood has always been active with people, but there was something different–more people walking dogs. Everyone headed in the same direction, north along Sixth.

So, of course, I had to find out what’s going on.

I didn’t have to walk far to find the answer. Kitty-corner from Jazz Alley, northeast of Sixth Avenue and Lenora Street, people were gathered around a fence. I saw some people open a gate and take their dogs inside.

The fence surrounds a small off-leash dog park (small as in 1,000 square feet), which opened to Amazon employees and the public in April. The park has a small patch of turf, concrete blocks, a big water dish for the dogs, a hose to refresh and refill the water dish, and a bench for the humans.

I watched the dogs for a while. A blonde labradoodle bounced back and forth while two black terriers jumped on a concrete block to watch the action. Other dogs raced around the fence. One sat in the turf. Some stopped playing long enough to sniff another dog, and sometimes the receiving dog sniffed back. Others sniffed while playing.

The Amazon Spheres Dog Park is open 24 hours, and admission is free. All well-behaved dogs are welcome. 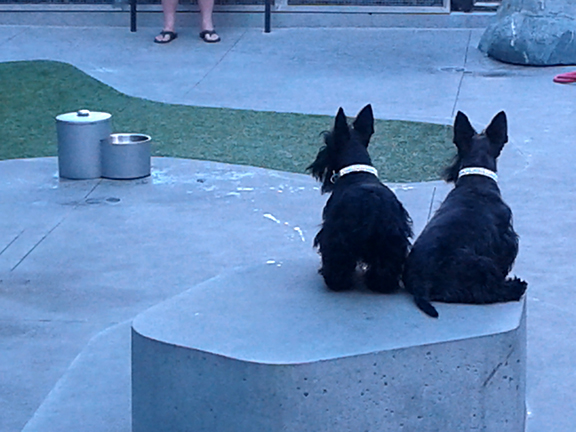