The COVID-19 pandemic has hit performing arts organizations hard worldwide. They’re closed because of the social distancing and shelter-in-place rules in their states, provinces, or countries. For most of these organizations, ticket sales account for 50-75% of their annual budgets.

Many of these organizations are now hosting free concerts virtually, either through Facebook Live, YouTube, Instagram, or their own websites. Most of these are recordings of previous concerts.

Other concerts are more creative from taking advantage of technology. For example, last week, I saw an incredible performance of the fourth movement of Tchaikovsky’s Fifth Symphony recorded remotely by more than 60 Civic Orchestra of Chicago musicians and compiled into a virtual symphony performance in celebration of the orchestra’s 100th anniversary. Watch the full concert, which includes seven new pieces commissioned for the annniversary celebration, on the Civic Orchestra’s Facebook page or the Chicago Symphony Orchestra’s YouTube page.

Here are 15 symphonies and orchestras providing access to virtual concerts and recordings. They’d appreciate donations, if possible. Any amount makes a big difference.

Based in Glasgow, the BBC Scottish Symphony Orchestra has a vast collection of videos from concerts and interviews on its YouTube channel. Some have a sense of humor, like a video of Second Violinist Ana do Vale trying to entertain her unappreciative cat.

The Berlin Phinaharmoniker has a Digital Concert Hall containing a large collection of archived concert recordings. Redeem a voucher by clicking a button at the top of the Digital Concert Hall page for 30 days of access to the entire archives. After 30 days, you can sign up for a monthly or annual subscription or continue accessing concerts listed as free.

I signed up for the 30-day voucher, which expired a week ago, and decided to continue without a subscription. Plenty of concerts are available.

There are three ways to stream music from the Boise Philharmonic:

The Calgary Civic Symphony has video clips from previous concerts and featuring rising stars on its Watch and Listen page. From there, you can access even more videos on its Vimeo and YouTube channels.

The Arts Commons in Calgary

The Eugene Symphony has a series called Musical Mondays on its Facebook page, along with livestreams from its Watch page. The next livestream is the full performance of Four Seasons of the McKenzie River on Saturday, April 25, at 7:30 p.m. Pacific time.

The Hult Center in Eugene, Oregon, home of the Eugene Symphony

The London Symphony’s YouTube channel has a vast collection of clips from past performances and behind-the-scenes videos.

The LA Phil’s Watch & Listen page has a wide selection of video clips and recordings from past performances, podcasts, musician interviews, and articles. Also tune into At Home with Gustavo, where Music & Artistic Director Gustavo Dudamel shares his favorite concerts and why he loves them. The English segments are Tuesday-Friday at 6-7 p.m. Pacific time, and two Spanish segments are on Sunday at 6-7 p.m. and 7-8 p.m. Pacific.

Stream recordings of orchestra concerts, at-home performances with the musicians, two-minute classical breaks, and interviews with the musicians at the Minnesota Orchestra at Home page. There’s also a section with musical activities for the kids. 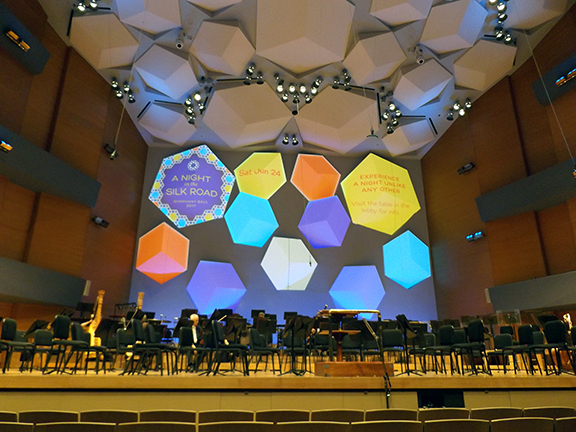 A view of the stage before a Minnesota Symphony performance at Orchestra Hall in Minneapolis.

On Monday and Wednesday at 10 a.m. Pacific time, tune into minute for music on the Oregon Symphony’s Facebook, Instagram, or website. Watch custom content created by symphony musicians, such as one of their favorite pieces played in unusual settings or “a day in the life of…” segment.

This organization in Rockport, Massachusetts, hosts a wide variety of concerts at the Shalin Liu Performance Center every year, including classical, jazz, and folk. Watch archived concerts in the Video Library. and on Rockport Music’s YouTube channel. The YouTube channel has a vast archive of performances from the annual Rockport Chamber Music Festival.

At noon Eastern time on Tuesday, Wednesday, and Thursday, Rockport Music presents Music at Midday, where a new video is posted of a previous performance at theh Shalin Liu Performance Center. Watch in either the Video Library, on YouTube, or at Rockport Music’s Facebook page.

The entrance to the Shalin Liu Performance Center in Rockport, Massachusetts

The Seattle Symphony streams recordings of concerts from Benaroya Hall on Thursday at 7:30 p.m., Saturday at 8:30 p.m., and Sunday at 2 p.m. (all times Pacific). Sign up for the weekly reminders and connect to the streams from either YouTube or Facebook Live at the symphony’s Broadcasts page.

The Vancouver Symphony in Washington State recently launched the VSO Podcast Channel, featuring interviews of members of the orchestra and recordings of its concerts.

The Vancouver Symphony in British Columbia has a VSO @ Home page, where it’s posting new and previous performances. The latest post is a virtual concert , where each musician plays their parts from home.

Catch the VSO’s final performance at its BeethovenFest on March 15 for one hour and 42 minutes of Piano Concerto No. 4 and Symphony No. 6 “Pastorale.”