The first Cape Hatteras Lighthouse was built of sandstone with a lamp powered by whale oil. The 90-foot-tall lighthouse started service in 1803. It could not effectively guide ships along the dangerous cape because it was too short, the sandy color blended into the environment, and the signal wasn’t strong enough for mariners to see.

Several modifications were made to the lighthouse, but they didn’t help, so in 1853, the height of the tower was increased to 150 feet. The new extension was painted red to help with visibility, and the light was replaced with a Fresnel lens. But by the 1860s, the tower needed extensive repairs, so Congress allocated funds to build a new lighthouse.

The base of the second Cape Hatteras Lighthouse

The original lens was powered by kerosene and could be seen 16 miles away. The lighthouse’s diagonal black-and-white stripes helped mariners distinguish it from the other lighthouses along the coast. 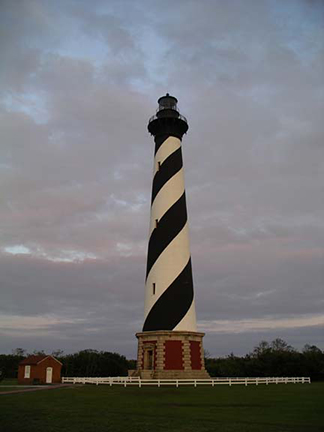 The Bureau of Lighthouses transferred the light station to the National Park Service in 1937, and it became part of the country’s first national seashore. The current light is automated and operated by electricity. In 1999, the lighthouse was moved 2,900 feet in 23 days to prevent damage from erosion. The keepers’ quarters were also moved.

The old site of the second Cape Hatteras Lighthouse

Today, the National Park Service maintains the keepers’ quarters and lighthouse, and the U.S. Coast Guard operates and maintains the automated light.

Self-guided tours of the lighthouse are available. 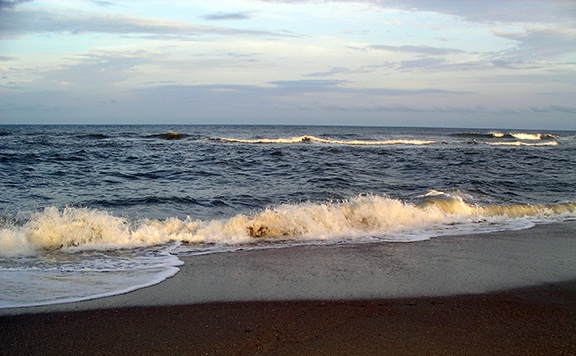 A view of the sunset from the Cape Hatteras Lighthouse