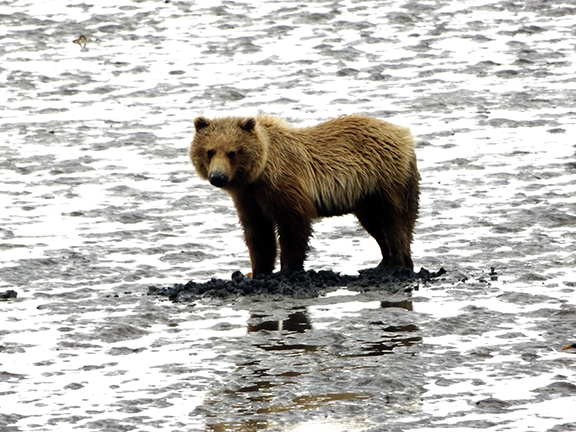 Lake Clark National Park and Preserve is among many rugged wilderness areas in Alaska with vibrant ecosystems. There are no roads, so a plane or boat is the only way to travel there.

The national park protects the ancestral homelands of the Dena’ina people, and it’s at the head of the largest sockeye fishery in the world. Abundant salmon and other marine life attract hungry brown and black bears, which makes the park a prime wildlife watching spot in the late spring and summer.

Several air taxi services provide bear watching tours from mid-May through mid-September. The air taxis approved by the National Parks Service are listed on the park’s Plan Your Visit page from their departure locations.

When I went on a bear watching tour to Lake Clark National Park and Preserve, I flew Regal Air from Anchorage.

An aerial view of Anchorage, Alaska

The tour lasts 6.5 hours, and a hearty box lunch is included. The flight is an hour and 15 minutes each way.

I took the tour during a Memorial Day weekend (late May for those reading outside the U.S.), so the bears were still skinny from their winter hibernation. My trip was on a cloudy day, but we still saw many breathtaking panoramic views of the mountains, lakes, and waterways from air and shore. 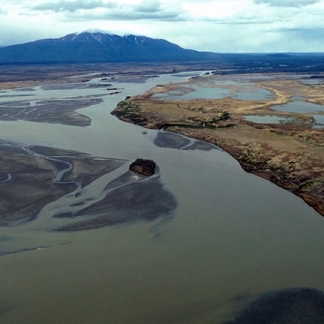 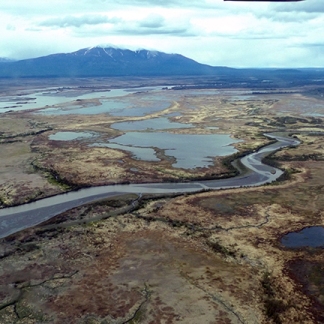 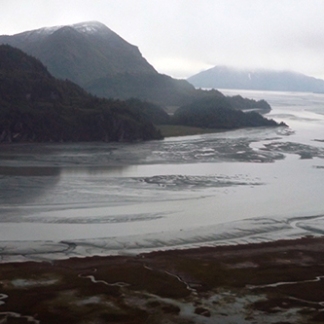 Before we left Anchorage, we watched a short video about the bears and finished a safety briefing at Regal Air’s base near the Anchorage Airport. (See these bear safety tips from the National Parks Service.) We flew from Regal Air’s base and landed at Chinitna Bay. Shortly after our ascent, we saw some beluga whales swimming below us.

When we arrived at Chinitna Bay, we saw two brown bears digging clams from shore. We watched them from a safe distance as they dug deeper into the wet sand. They scooped a clam from the sand, cracked open the shell, ate the meat inside the shell, and returned for more. 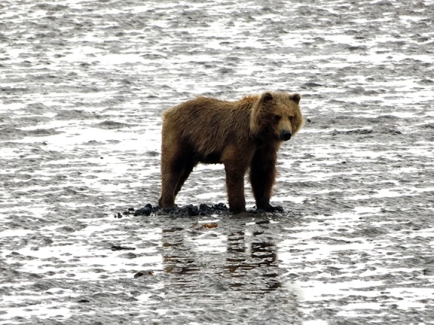 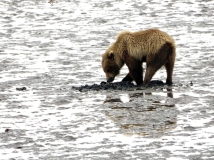 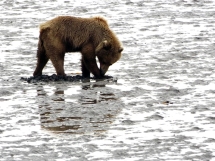 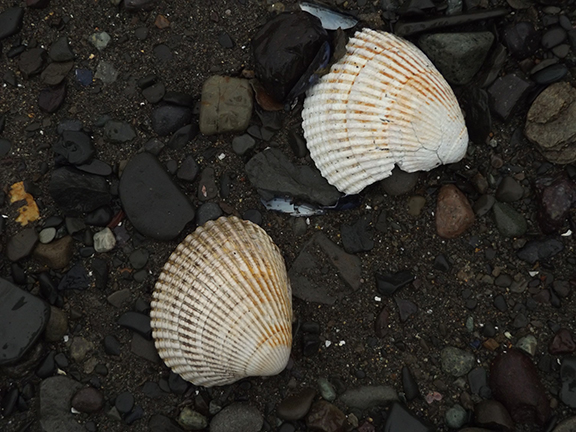 Shells in the sand at Chinitna Bay, Alaska

After watching the bears dine for about an hour, we wandered a short distance inland by foot and saw more brown bears in a meadow. The pilot and copilot, also our guides, were very knowledgeable about the bears and provided safe traveling and viewing experiences.

A view from our walk along the beach in Chinitna Bay, Alaska

Brown bears are quite large. Here’s a track I saw on the beach, which I compared to my foot. I wear a size 9 shoe, and this bear’s footprint is much larger!

A brown bear taking a break from clam digging in Chinitna Bay, Alaska

After we left Chinitna Bay, we flew to an isolated sandbar to eat lunch, then returned to Anchorage. During our 30-minute stop, we saw a moose in the distance.

Our lunch stop on the way back to Anchorage

Regal Air’s box lunches have a sandwich with all the fixings, a bag of potato chips, two cookies, an apple, and a bottle of water. You can choose from several types of sandwiches when you make a reservation. A vegetarian option is available.

Another brown bear taking a break from clam digging in Chinitna Bay, Alaska

Watch the bears live at Brooks Falls at the brown bear salmon cam.

Check out my armchair photo tour of Katmai National Park and Preserve.